For all of your Coywolf needs and desires
By: Rose and Becca 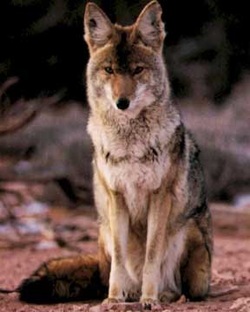 This is the beautiful Coywolf.
History

The Coywolf is a hybrid breed of coyotes and wolves, that over the years has begun to populate cities and parks in urban areas. It all started when the wolf population began to decline because of loss of habitat. The small population of wolves restricted their habitat to the region of Algonquin park and the coyotes populated  the now empty territory. Because of the decline in wolf population, they began to see them as breeding partners instead of enemies.
Algonquin Park played a large role in the origins of this breed because it was a safe zone that both breeds were somewhat confined to. There were not many people or dogs to bother them in this protected area.  It was because of this that the coywolf came to be.