How does the coywolf differ from coyotes and  wolves. 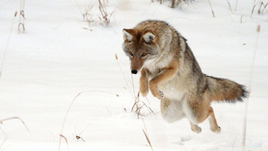 This image shows a coywolf hunting for its next meal.
Attitude:
The Coywolf is an adaptable mammal that is able to live unnoticed in many environments where people are. They are not very afraid of people like the coyote is and has even bitten people, which is similar to the wolf. They live on there own after 2 years once they have found their life mate. The wolf on the other hand will stay with their mother until they are 5 years old when they form their own pack. They hunt for small prey alone, unlike wolves who hunt for large prey in packs.


Appearance:
The coywolf has long legs and fur, big paws, short ears, thick skulls, and are more muscular than coyotes . Their size is in between the wolf and coyote or about twice the size of the average coyote. They have a tail that is like the wolf, very long, their fur colour ranges from blonde, to darker black and brown, however, they are usually tawny brown. 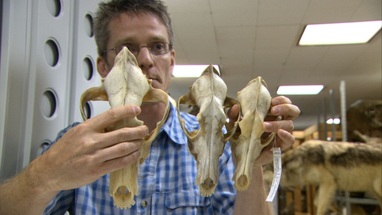 This Image shows the sizes of the skulls from left to right, they are: wolf, coywolf, coyote. As you can see the coywolf is right in the middle.
Powered by